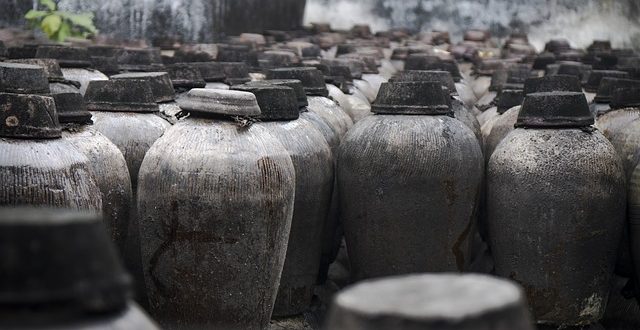 The history of wine

This a good topic to start an heated discussion, especially if various nationalities are around the table. First point, wine history doesn’t start in France, Italy or Spain.

Wine was most likely discovered by accident as picked fruits naturally fermented in various regions quite separately.

There is evidence of a fermented wine-like drink from the Chinese village of Jiahu dated from 8000 to 9000 years ago (6000 to 7000 B.C.) The millet or rice wine was discovered by chemically analysing traces from 16 buried jars. The wine was found to contain rice, beeswax, hawthorn or wild grape fruit. A 3000 year old bronze jar was unearthed still containing a similar liquid wine.

Wild grapes grew in modern day Iran, Turkey and Armenia. Chemical tests of ancient pottery jars reveal that wine was (like beer) was produced about 5000 years BC in what is today Iran. It is likely that the name of the Shiraz grape originates from the Persian town of the same name. This discovery is particularly significant, as this area was not a grape growing one, the main crops were grains and the preferred drink of the time was beer, which suggests that wine was possibly traded as a commodity.

Hieroglyphics show that the Pharaohs had a liking for wine. Grapes as well as figs, palms, dates and pomegranates went into the pot. So the taste would have been completely different to what we would expect when being served wine today. Making wine from various fruits is essentially the same as that of grapes, except sugar is added to help the fermentation.

Wine played an important part in ceremonial life in ancient Egypt. Although the wild grape never grew there, a thriving royal winemaking industry had been established in the Nile Delta – most likely due to Early Bronze Age trade between Egypt and Canaan by at least Dynasty 3 (ca. 2700 B.C.), the beginning of the Old Kingdom period. Winemaking scenes appear on tomb walls, and the accompanying offering lists include wine that was definitely from vineyards in the Delta. By the end of the Old Kingdom, five wines – all probably made in the Delta – constitute a canonical set of provisions, or fixed “menu,” for the afterlife.

Evidence of wine presses dating back to 3000 BC have been found in Crete. In Greece it took on a religious link, the Greek God of wine is Dionysus. We credit Greece with establishing the principles of viniculture and the spread of wine making to Southern Europe.

The Romans pretty well started Europe’s modern wine industry. Wherever they conquered, they planted vines. They introduced the wooden barrels and closures to protect the wine. Bacchuss, their wine god  is familiar to us all.

Monks became major producers to satisfy the needs of religious ceremonies, across Southern Europe wine was the drink for all. Further North, the higher cost (due to transport) limited to the wealthier classes. As prices fell, more people got the taste, though even in 1970’s Britain, wine was still considered somewhat posh!

The history of wine in what we call the New World actually goes much further back than we may think. Early Spanish settlers planted vines in Mexico whilst the Dutch established vineyards in South Africa in the seventeenth century. It was though in the late twentieth century these regions upped their game and developed export markets.

Previous Wine Knowledge – Versatile Chenin Blanc
Next Prosecco – We seem to like it!