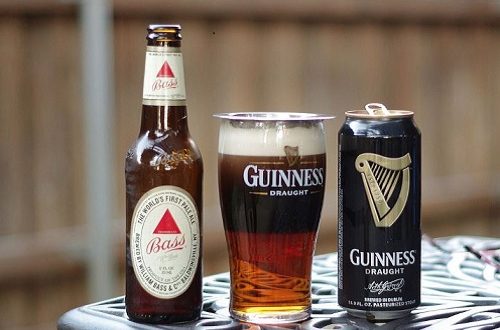 Beer drinkers of a certain age will be familiar with some rather unusual concoctions or beer cocktails. Before laughing at them, you should be aware that drinkers in the 1960s and 1970s didn’t have the choice or the quality we now enjoy. Most pubs were tied to a brewer, many only had on offer one keg bitter, one keg lager and often Guinness on draught. Fewer and fewer had any real ale, even if they did, it was often in poor condition. Guinness was often the safest bet, the keg lagers and bitters of the time left a lot to be desired.

It’s not surprising with such a poor choice that drinker experimented, here are the beer cocktails I remember, if you know of any more, please tell us.

This comprises half a pint of bitter mixed with a half pint bottle of Light Ale. It was particularly popular in London. Adding the carbonated Light Ale gave a bit of life to the typically flat Bitters on offer. The other benefit was financial, busy bar staff often poured more than half a pint, so you finished up with more than a pint. Brown and Mild, is basically the same idea, adding Brown Ale to Mild. In reality, many brewers bitters and light ales or their dark milds and brown ales were the same brews, just packaged differently.

This is one to confuse bar staff and not one I remember. What goes into each half varies by region and possibly by brewer. From my limited research, one variation is Porter and a lighter beer (bitter), dating back to the early twentieth century. Porter incidentally replaced an earlier beer cocktail made in the pub from various aged brews. More recently it can cover half of mild mixed with half of bitter.

Officially, this is draught Guinness mixed with Champagne. The drink apparently dates back to the nineteenth century when it commemorated the death of Prince Albert.

In practice Babycham, common in the 1970s, was often substituted for real Champagne, other sparkling wines were pretty rare in UK pubs then. Real Black Velvets were rather expensive.

The more common pub variant, mixes Guinness with Cider sometimes known as a Snakebite. Snakebite can also refer to Stout and Bitter or Light Ale, another variation. The drink enjoyed a reputation for quickly getting you drunk, most likely due to it being easier to drink than Guinness alone, so you drank it quicker.

Another with Guinness as the base, here a bitter, traditionally Bass, is added. Here though, the aim was not to mix, the bitter was added first, and the Guinness floated on top. A nightmare for the bar staff to get right.

You have to understand that British Lagers in the 1970s were poor imitations of the continental offerings even if they had the same name. Brewers loved them. They were cheaper to brew and distribute yet commanded a big price premium, more than justifying the heavy marketing spend. For the drinker, the issue was that they didn’t really taste of anything. Not surprising then, some drinkers tried to spice them up. Lime cordial was the most popular, blackcurrant was another. These were a nice little earner for pubs, Lime cordial displaced some of the beer in the glass and was cheaper to buy.

The mix of beer and lemonade is still with us today. It serves several purposes, masks beer’s bitterness, has less alcohol and livens up poorly kept draught beers. Like cider it was once considered OK for children, only the very weak pre-mixed type is. Ginger beer gives more flavour than lemonade.

Thankfully now we have much better beers on offer so we no longer need to mix, just for fun one day I’ll go into a pub and ask for a Brown and Mild, just to get the reaction.