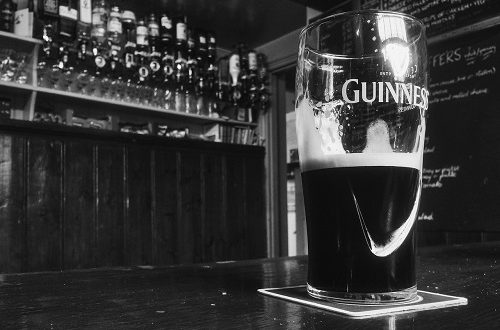 Guinness in Dublin is synonymous with Stout today, but the roots of the beer style are traceable to Porter, a popular beer in London in the 18th and 19th centuries. Stout and Porter are more or less the same thing, Stouts origin as a name was as a prefix to describe stronger Porters.

Porter came to prominence during the 18th century. The beer styles popularity with porters working in the docks and along London’s rivers is widely reputed as the source of the name.

Porter is made from cheaper brown malt, it came in various strength, all strong by today’s standards. Crucially the style lent itself to production on a large scale, leading to the establishment of giant London breweries such as Truman and Whitbred. Consequently it was low priced but wholesome, further fuelling its popularity.

Over time, although brown malts were cheaper more were required, they were replaced with pale malt and a small quantity of roasted barley or patent black malt.  Wars and taxation played their part, as a result, strengths and hopping rates decreased. Light beers, notably from Burton on Trent, gained ground and during the latter 19th century Porter sales were falling. The stronger, mainly bottled Stouts (as stronger Porters were now known) continued to be popular well into the twentieth century, some surviving today.

Porter brewing as such had virtually ceased by the 1950’s, with the revival of interest in beer, some micro and regional breweries now offer revised versions. Fullers London Porter being a good example.

Although associated with London, Porter spread to other UK cities and notably Dublin.

Arthur Guinness opened his brewery in Dublin in 1760 to brew Porter. Unlike the English style, he went for a more bitter taste. It was a good move, business boomed. The beer range evolved but for many decades hardly changed, being; Porter, Extra Stout and Export Stout. It grew to be the world’s largest brewery. Guinness’s Porter survived until the 1970s in Ireland.

Guinness now part of Diageo is no longer a leading player in the worlds brewing industry, but due to its distinctive style retains a high profile. Although other including Lagers have been introduced, Stout production still dominates.

Not surprisingly, other Irish breweries followed. Murphys Irish Stout, now part of Heineken based in Cork, comes from the country’s second largest brewery.

The name arises due to the use of Lactose, the sugar found in milk, being non-fermentable it sweetens the drink. Mackeson once part of the Whitbred empire survives today. Many, such as Watneys Cream Label and Jubilee are no more.

Oats being widely grown in the UK have a long history in brewing, overuse imparts a bitter taste.

Oatmeal stouts, before better awareness were seen as beneficial to health, in practice though, the oat volume was minute. Samuel Smiths, based in Tadcaster, Yorkshire brew a modern revival of the style.

For many years, these were the strongest regularly brewed beers reaching 10% or more. Also known as Russian Imperial Stout, Barclay Perkins (later Courage) supplied the Russian Royal Family. The style is made by some Baltic breweries today.