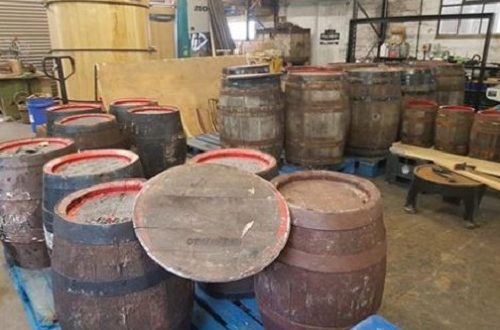 For over 2000 years, wooden barrels have been used for transporting liquid and solid goods. Today, wooden barrels still have an important role to play in the maturing of various alcoholic drinks. With the resurgence of artisan brewers, there is a renewed interest in using wooden casks.

Coopering, the making of barrels is one of the oldest industries. Early civilisations needed to move things. The barrel could be easily rolled and its convex shape made cornering easy. The design has hardly changed throughout it’s long history, even today, aluminium and plastic casks are similarly shaped. Up and down the country, thousands of Coopers were employed. The Bass brewery in Burton on Trent alone had over 400 at its peak. If your surname is Cooper, it’s likely one of your ancestors had this skill.

Traditionally barrels are made of oak, now mainly French or American, with iron hoops. Coopers, as well as making new barrels, spent much of their time repairing used ones. Worn out barrels would be remade smaller several times in their life. The Coopers tools are little changed many of which are passed down generations. They do of course come in various sizes depending on use.

The traditional sizes are;

Pressurised Kegs can use alternative sizes.

A handful of breweries still distribute some of their beers in wood, Samuel Smith and Theakston, both in Yorkshire and still employing a Cooper. Wadworth in Devizes and an increasing number of Artisan brewers. Some, mainly specialist strong beers are matured in barrels. Marstons in Burton on Trent, ferment their Pedigree beer in the last remaining Union System, once common in the town, which uses wooden casks.

The White Rose Cooperage based in Wetherby also in Yorkshire makes, repairs and sells to this expanding market.

Oak barrels are still widely used for maturing wine and some times for fermenting. Volume producers may emulate the process, by using wood chips insides a stainless steel maturing vessel. Wine barrel sizes vary by region and country. As they are moved about less, they are normally larger ranging from around 200 – 250 litres.

Unlike their modern counterparts, wooden barrels allow small amounts of air to enter this slight oxidation is part of the maturing process. There is some evaporation, the angel’s share, overtime some “topping up” may be needed. Importantly, the wood adds tannin and vanilla character to the wine.

New and used barrels are used depending on the type and style, some use barrels of a certain age. Some wines make use of barrels previously used for other drinks notably Bourbon. They are discarded after so many years use as they cease to impart flavours.

Maturing in Oak is a crucial step in Whisky making, imparting flavour and colour. It is a clear following distillation. There is a fundamental difference between the US and UK. In the US, for Bourbon and others most types,  new oak barrels must be used each time. In Scotland the opposite applies, Scotch Whisky is matured in used casks for a minimum of three years, often longer. Ex Bourbon, Sherry, Rum and others are used, each producing particular flavours.