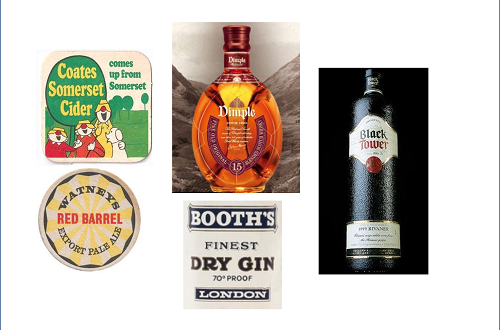 It may seem odd now, but in the 1960s it wasn’t uncommon for children to be given the odd “small” glass of cider. Coates was a leading supplier, the cider was sold in quart (two pint) returnable bottles with a heavy screw stopper. By the way, the tops screwed into the bottle (internal thread) the opposite to that now used for wine. Being robust, these bottles were extremely popular with home brewers. Pocket money was boosted by returning the empties and pocketing the refund.

Coates cider was heavily advertised on TV with a song featuring the strap line “Coates comes up from Zumerset, where the cider apples grow.” In those days, the alcohol content was not shown, presumably though it was quite low, it was also very sweet.

From being a household name in the 1960’s, sales declined, there were takeovers and finally production was moved and slowly phased out.

This is the beer that folklore suggests led to the founding of CAMRA. Whilst probably not true, it certainly helped boost membership. Watneys was one of London’s leading brewers owning many of it’s pubs. Through their ownership of Wilsons of Manchester and Websters of Halifax, Watneys Red had close to national distribution. It was also exported and reputedly available on the QE2. For a while it was the top selling keg beer in the country promoted widely with the song “Roll out red barrel.” It lost out to the rising fashion for lager, the recovery of real ale and that it really wasn’t (in my opinion) very nice to drink!

The giant South London brewery went on to produce Budweiser (the US variant). Watneys was also known (not positively) for Party Seven, a seven pint can for parties. It’s often said that the same can could go to several parties before being opened by desperately thirsty drinkers at a party, where it was all that was left. It was memorable as the beer to turn you off drinking beer, best forgotten!

For top German winemakers, Black Tower is possibly not forgotten enough. Today, the reputation of German wine is still heavily influenced, not positively by the legacy of their easy drinking sweetish wines that dominated the UK market in the 70’s and 80’s. Black Tower was then the main competitor to Blue Nun covered in a previous post.

It came in distinctive cylindrical black bottle with distinctive lettering on the label. Like it’s competitor it was well marketed, the anglicised name was easy to remember and it was widely available. It’s easy to mock these wines now, but back then, when most of us were not wine drinkers, they were very popular, and it was more sophisticated to take a bottle of Black Tower to a party, than a few bottles of light ale.

Black Tower is far from forgotten, but the company and the wines have moved on. The bottle shape though remains. Black Tower is Germany’s leading wine exporter, now offering a choice of wines.

Like Black Tower, Haig whisky is still around, but it doesn’t enjoy the high profile it once did. The brand has a long history, dating back to the eighteenth century, it was once the largest and distilled in possibly the first commercial distillery. It was pioneer in the use of the Coffey type of still to produce grain whisky.

Dimple Haig, dating back to the 1890’s is named after it’s distinctive bottle. It is an early example of building a premium brand. Advertising was underwritten with the catchy slogan “Don’t be vague, ask for Haig.”

Haig was one of the founding companies forming the Distillers Company which together with brands like Johnny Walker are now part of Diageo. The Haig brands are now  best described as specialist rather than main stream brands in the Diageo portfolio.

Anyone familiar with Hogarth’s famous cartoon Gin Lane will know that Gin had a somewhat dubious reputation in the eighteenth century. Booths dates from this era, gaining a reputation with London’s East Enders for producing an unadulterated drink at a time when others were less scrupulous.

Booths Gin unusually spent some times in cask giving it a slightly yellow colour. This probably didn’t influence the flavour, but it did prevent pub landlords substituting it with cheaper brands.

At it’s peak it was a leading producer, today the brand belongs to Diageo and is no longer in regular production. The Red Lion Cocktail lives on, strictly it should be made with Booths Gin and is named after the distillery.

Previous Trailblazing Wine TV
Next English Tea, grown in Cornwall not in China or India